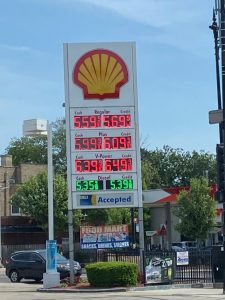 Sign the petition to tell legislators to get back to Springfield to address gas prices!

Despite these unprecedented prices that are doing harm to Illinois families, the Legislature seems to be content taking advantage of this crisis by gouging consumers of millions of dollars it never expected to receive, said State Senator Craig Wilcox, who is calling for legislators to return to Springfield immediately to provide meaningful relief at the pump.

Before adjourning the spring session in early April, Senate Republicans called for a proposal that would cap the state’s sales tax on gas, saving consumers up to 20 cents per gallon (about $1 billion per year), depending on the price of gas. Unfortunately, Governor Pritzker and Democratic legislators had something else in mind and passed a law that would simply delay an automatic two-cent increase to the state’s Motor Fuel Tax, which was set to take effect on July 1, 2022, until after the election in November. Consumers would see that two-cent increase on January 1, 2023, and then another increase on July 1, 2023.

While the Governor is touting this as relief, Sen. Wilcox is warning consumers to keep in mind that this isn’t relief at all, and they will be paying the same price in July that they are now.

Sen. Wilcox is calling for a special session to repeal the Governor’s two-cent election-year gimmick and pass real relief such as Senate Bill 4195, which caps the amount of sales tax the government can collect for its General Revenue Fund at 18 cents per gallon and is more in line with what motorists were paying before gas prices skyrocketed earlier this year. Sen. Wilcox is a Chief Co-Sponsor of the bill.

Illinois is one of just seven states that charge a sales tax on top of the motor fuel tax. While both the state and federal gas taxes are a flat tax, which means the tax does not change with the price of fuel, Illinois also charges a sales tax (6.25 percent) on top of the motor fuel tax, which means as gas prices go up, so does the amount of money the state receives.

Sen. Wilcox explains that the Motor Fuel Tax goes straight to the Road Fund and pays for critical infrastructure projects like the repair of roads and bridges. However, the sales tax goes into the state’s General Revenue Fund for politicians to spend on whatever they wish, such as pork projects.

Consumers can see how much they would save at the gas pump under Sen. Wilcox’s plan by using the gas savings calculator found below. Simply enter the current price of gas per gallon and the estimated gallons purchased per week and see how much your family could save per month.

If you agree that legislators should immediately return to Springfield to address this crisis and provide real relief at the pump, consider signing onto Sen. Wilcox’s petition, here.