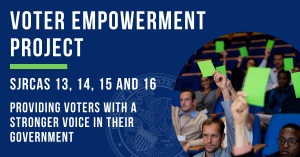 State Senator Craig Wilcox (R-McHenry) is co-sponsoring a series of constitutional amendments that would amplify everyday Illinoisans’ voices and provide them opportunities for greater involvement in the democratic process.

“Decades of mismanagement by the majority party has had disastrous results on our state’s finances, on the regulatory system for business, and on people’s ability to live freely in their communities,” said Sen. Wilcox. “These constitutional amendments provide Illinoisans with important tools that can help them reject harmful political agendas.”

SJRCA 13: Requires an independent redistricting commission, where the chief justice of the Illinois Supreme Court and the most senior supreme court justice of the opposite party would jointly select 17 commissioners to serve on the commission.

SJRCA 14: Allows Illinois voters to make more substantive changes to their constitution. The Illinois Constitution currently limits citizen-initiative amendments to specified structural and procedural subjects. This amendment would put voters in the driver’s seat, allowing them to circulate petitions for and vote on many key issues such as taxation, redistricting, and other important constitutional provisions.

SJRCA 15: Permits citizens the ability to initiate up-or-down referendums on newly passed laws. By giving citizens the right to veto unpopular or rushed legislation, the amendment would allow voters a form of popular redress to political overreach and unwanted mandates.

SJRCA 16: Allows voters to recall elected officials including any executive branch officer, the Speaker of the House, the President of the Senate, the Auditor General, Members of the General Assembly, and local government officials. Currently, only the Governor is subject to recall.

“People feel disenfranchised because their opinions are ignored by the party in charge,” Sen. Wilcox said. “They feel their voices don’t matter. But these reforms would hand state government back to the people, and would provide a framework through which Illinoisans can reverse bad decisions that are harmful or dangerous for our state.”