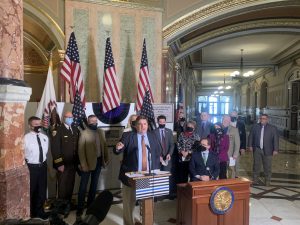 Citing the urgent need to take swift action to stem the ongoing spike in violent crime across the state, the members of the Illinois Senate Republican Caucus unveiled an updated legislative package targeting violent crime and offering a critical lifeline to law enforcement efforts.

“There is no excuse to go another single day without addressing the crime wave that is wreaking havoc on our state. While our package won’t eliminate crime completely, it would get us on a good path toward safer neighborhoods,” said Senate Republican Leader Dan McConchie (R-Hawthorn Woods).

Members of the caucus held a press conference to announce their new legislative initiatives in the Capitol rotunda in front of the police remembrance wall, which is dedicated to honoring fallen police officers from the past year. This comes three months after they first held a press conference pleading for help from across the aisle to address crime.

“We were here in October to offer reasonable proposals to help reduce crime, but the Democrats who control Springfield have refused to act in the months since then,” said State Senator Chapin Rose (R-Mahomet). “We’re here again, demanding the Democrats take action to protect the people of Illinois from the violence on our streets.”

The legislative package includes a “Fund the Police Grant Act,” which would provide targeted grants to assist law enforcement, provide additional training, and purchase much-needed equipment, including body cameras. The senators called for greater support for the men and women tasked with protecting communities across the state, noting that police officers and sheriffs were leaving the law-enforcement profession in unprecedented numbers. In many cases, officers leaving the profession have indicated that it was, in large, part due to provisions of the so-called “SAFE-T Act,” an anti-police package rammed through by a partisan vote in the late-night hours of a lame-duck session in January 2021.

“Part of the reason I decided to retire is that Illinois Democrats made a decision to push forward police reform that I felt would have a negative impact on law enforcement officers and our work to fight violent crime,” said David Hunt, retired Piatt County Sheriff. “I support the legislative package that the Senate Republicans have unveiled and believe it would have a positive impact.”

“As a mother myself, we owe it to the parents of this state to provide a safer place for them to raise their kids,” said Senate Republican Deputy Leader Sue Rezin (R-Morris). “Our first step to doing that is by supporting our police and enabling them to do their jobs.”

“These are reasonable, common-sense steps we can take today to protect our communities,” said State Senator Steve McClure (R-Springfield). “If Democrats are truly ready to do something to protect the people of this state, they can prove it by allowing these bills to be heard, debated, and considered in committee.”

The Senate Republicans’ legislative package has the support of the Illinois Sheriffs’ Association and the Illinois Fraternal Order of Police.

“This legislative package is an important step toward protecting our communities and our police officers. Our officers, who day-in, day-out, serve our communities, sometimes at considerable risk to themselves, deserve a voice at the table when it comes to public safety,” said Chris Southwood, President of Illinois Fraternal Order of Police. “The Senate Republican proposals incorporate the concerns of law-enforcement professionals from across the state and seek to undo the damage done by last year’s anti-police overhaul.”

To view the full text of the Senate Republicans’ package, click here.