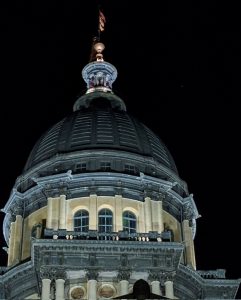 In what has become an unwelcome and unnecessary General Assembly tradition, the state’s budget was rushed through the legislature under the cover of darkness during the final hours of the last day of session. Statutorily-required committee votes were skipped, and the mammoth spending plan came to the floor for final consideration before anyone had an opportunity to read all 3,479 pages. In the coming weeks, as we fully digest the budget and budget implementation bill contents, we will identify hidden “gems” the majority party hid in the documents. One thing we know for sure is that this year’s budget was chock-full of election-year gimmicks and new permanent spending.

The FY23 budget spends $46.5 billion, which sets the record for the most spending in state history. This is a billion dollars more than what the Governor asked for in his February Budget Address. Don’t get me wrong. There are some good things in this budget; things I would have approved as stand-along measures. But when it comes to spending $46.5 billion of taxpayers’ money, I believe statutory bill vetting processes should not be circumvented. This is your money being spent, so process DOES matter!

In addition to the spending, Democrat lawmakers presented temporary tax relief totaling $1.8 billion that expires shortly after this year’s November election. The short-term relief includes freezing the motor fuel tax inflationary increase for six months, suspending the one percent sales tax on just groceries for a year, and a one-time property tax income tax credit rebate check. As an additional political element of the gas and sales tax measures, the majority party approved the placement of signs on all gas pumps and acknowledgment on all grocery receipts that the tax relief is due to legislative action.

While the relief approved by the majority party is temporary, Senate Republicans proposed a legislative package of permanent tax relief this year that included capping the state’s sales tax on gas at 18 cents per gallon, cutting the one percent sales tax on food and prescriptions, doubling the senior income tax exemption from $1,000 to $2,000, increasing the property tax income tax credit from 5 percent to 10 percent, and creating a childcare credit in an amount equal to 25 percent of the federal tax credit for each qualifying child. Every Republican proposal seeking permanent relief for Illinoisans was blocked by the Democrats who control the flow of bills at the Capitol.

State lawmakers had a golden opportunity to provide real relief to Illinois families struggling to keep up with high inflation and out-of-control taxes, and I am extremely disappointed that the majority party chose to only provide gimmicky relief that expires after our state’s election is over.

Sen. Wilcox rejects Democrats’ half-measures, casts sole “NO” vote on temporary relief plan
While votes for the budget and the budget implementation (BIMP) bill fell mostly along party lines, I cast the sole dissenting vote on a Democrat so-called “tax relief” bill that offers temporary measures that expire in 2023, and in most cases within weeks of the November election.

I believe that money would have been better-spent addressing state debt or providing permanent tax relief to Illinoisans facing record-high inflation. Budgets are all about setting spending priorities, and statehouse Democrats showed us they are willing to use people’s tax dollars as a political tool. I felt I had to stand against efforts to use people’s money to promote their political agenda. By structuring one-time ‘rebate’ checks to arrive shortly before the November election, and providing temporary tax relief that expires shortly after the election, they made it clear they have no problem bribing Illinoisans with their own money versus paying down state debt or adopting measures that would provide permanent tax relief.

The majority party had an opportunity to use billions in federal ARPA funds and higher-than-anticipated sales tax revenues to address the state’s Unemployment Insurance Trust Fund deficit or to help shore up the state’s pension system. Either would have reduced the state’s ongoing need to engage in expensive borrowing and interest payments. The Governor boasted about putting an extra $500 million toward pension debt in the FY23 budget, but even with that extra allocation, the actuarially-based reality suggests we will fall behind another $4.1 billion this year. If we had channeled toward pension debt the $1.8 billion in temporary measures, plus a $1 billion line item the Democrats have set aside for other future use, we could have saved Illinoisans over $10 billion in future pension debt interest costs. The growing pension deficit, coupled with the budget growth of $3 billion of new spending for FY23, shows Democrats are not interested in being the best stewards of taxpayer funds.

Senate Republicans proposed several permanent tax relief measures that were blocked from consideration this year. They include:

By rejecting our permanent relief proposals, statehouse Democrats said they would rather have people’s money in the state’s coffers than in individuals’ pockets. And by channeling tax dollars toward short-term measures, they’re showing how insincere they are about the struggles Illinoisans are facing. When their ‘relief’ evaporates in 2023, the gaping hole in the Unemployment Insurance Trust Fund will remain, pension debt will continue to climb, and Illinois residents will be on their own to manage the skyrocketing costs of gas, groceries, and medical prescriptions and devices.

Last week I welcomed “Roar for AJ” to the Capitol for a moving display that drew attention to the issue of Child Abuse.

It was three years ago this week that we learned of the horrors of AJ Freund’s life and ultimate death at the hands of his parents. Neighbors, community members and others formed the “Roar for AJ” advocacy group, and continue to bring awareness to problems within the Illinois Department of Children & Family Services (DCFS), which had multiple contacts with AJ Freund’s household during his short life.

Tracy Kotzman organized the display which included an empty pair of children’s shoes for each Illinois child who has died during the last three years despite involvement by DCFS. It honored not just AJ Freund, but all children who died as a result of abuse in their homes.

Click here to view a video that includes my Senate floor comments about the display, and photos from the event. 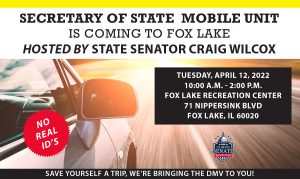 Today I’m bringing the Secretary of State’s Mobile Drivers’ Services team back to the 32nd District for a mobile DMV event in Fox Lake. The 10:00 a.m. to 2:00 p.m. event will take place at the Fox Lake Recreation Center, 71 Nippersink Boulevard.

Available services will include:

Seniors age 75+ must visit an established Secretary of State Driver Services facility to renew a driver’s license, and no Real IDs can be obtained at the event. Payments for services must be made by check, credit card, debit card, or money order. No cash will be accepted.

Residents are encouraged to pre-register for this event, and can secure their spot by visiting https://www.ilsenategop.org/sen_wilcox_fox_lake_sos_mobile_unit. Before coming to the event, residents can visit www.cyberdriveillinois.com to learn about identification requirements for specific services. For additional information or help with pre-registration, please contact Paige at Pbuente@sgop.ilga.gov.

Law enforcement to receive some help 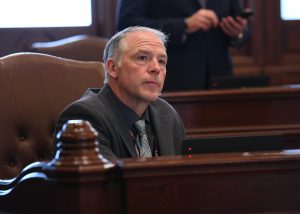 These measures were all filed and passed within a matter of a few days, as Democrats appeared to scramble to take some action regarding the rise in violent crime. However, Senate Republicans have had proposals on the table for nearly a year and a half that not only provide aid to help law enforcement officers, but also hold violent criminals accountable—something clearly lacking from what was passed out of the legislature.

These are worthwhile proposals, but I would have liked to see the General Assembly take up ideas within the Senate Republicans’ public safety package in order to truly address the underlying issues causing the problems. I fear that without the passage of legislation that truly holds violent criminals accountable for their actions, the measures that passed may only serve as a temporary band-aid.

State’s Attorneys Head to Capitol to Warn Lawmakers of the Need to Fix Criminal Justice Issues
If no action is taken to undo recent criminal justice reforms, prosecutors will soon have a much harder time keeping dangerous criminals behind bars. That was the message from several State’s Attorneys who visited the Capitol on Wednesday, April 6.

The State’s Attorneys from Fayette, Kendall, Mercer and Vermilion Counties held a press conference with members of the Senate Republican Caucus to highlight the need for action. They warned about changes to criminal law statutes that will kick in on January 1, changes that will make it nearly impossible to hold many violent criminals in jail while they await trial. In addition, they expressed serious concerns regarding other provisions, including a new rule that will potentially allow victims of domestic violence and sexual abuse to be ordered to testify almost immediately at bond hearings.

The changes in law were due to the passage of the SAFE-T Act in 2021. That legislation, totaling nearly 800 pages, was passed in the middle of the night on a party-line vote, with little advance warning during a lame-duck session of the Legislature.

One of the state’s attorneys noted a recent case in which a suspect was caught on video shooting at a car. Because of provisions in the SAFE-T Act, a suspect can’t be held in pre-trial custody for that crime unless prosecutors can identify a person that the suspect poses an immediate threat to. While the shooter in that case could be identified, the individual or individuals in the car could not be, so the suspect would have to be released.

The state’s attorneys noted the chilling effect that other pending changes have had on the law enforcement community, pushing many officers and sheriffs into leaving their careers in police work behind. They also believe that the changes will encourage and embolden criminals.

Senate Republicans filed legislation earlier in the year that would repeal these new pre-trial provisions, but they were never given consideration.

A final push on legislation
During the final two weeks of session, Senate Republicans were able to pass several different initiatives through the General Assembly. I supported all of these measures and am a Chief Sponsor or co-sponsor of many of them.

The Senate Republican legislation that passed in the final days included:

The General Assembly adjourned its spring legislative session around 3:30 a.m. on Saturday, April 9. Legislators will spend the rest of the spring and summer in their districts tending to the local needs of constituents before returning to the Capitol for veto session this fall.