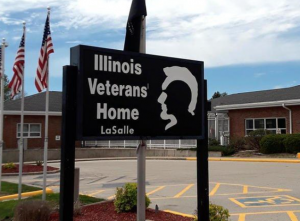 On May 5, the Office of the Auditor General publicly released its report on the COVID-19 outbreak at the LaSalle Veterans’ Home, just over a year after a resolution was adopted that directed the Office to conduct a performance audit of the state’s response to the outbreak.

As you may know, I am a retired Colonel of the U.S. Air Force and also the Republican Spokesperson for the Senate Veterans’ Affairs Committee, so issues involving our veterans are very important to me. The contents of the Auditor General’s report infuriated me, and prompted me to pen a guest editorial that appeared in the Shaw Media newspapers in various parts of the state. Click here to read it.

The findings of the report were both shocking and condemning, as they contradicted findings made in a report released last year by the Governor’s appointed Department of Human Services’ (DHS) Inspector General, as well as testimony by members of the Pritzker Administration during legislative public hearings.

AG Report on Failings at LaSalle 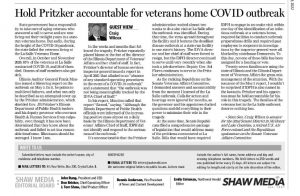 The Auditor’s report revealed that the Illinois Department of Public Health (IDPH) and Pritzker Administration officials “did not identify and respond to the seriousness of the outbreak,” despite knowing about the increasing positive cases at the Veterans’ Home. It also shows that it took the Illinois Department of Veterans’ Affairs (IDVA) Chief of Staff to specifically request assistance from IDPH for the Department to act, which did not occur until nearly two weeks after the start of the outbreak.

The Auditor General’s report also indicated that the DHS Inspector General’s report, ordered and limited in investigative scope by the Governor, was incorrect when it found that the outbreak wasn’t being meaningfully tracked by IDVA, as IDPH and the Deputy Governor for Health & Human Services were provided daily detailed information, which was in fact being used in the IDPH Director’s daily briefings at the time.

This report justifies the skepticism that Republican lawmakers had when the Governor chose to use one of his appointees to conduct an investigation and why it was important to have the independent Auditor General review the state’s response. I also believe that the General Assembly must hold legislative hearings to demand answers from the Pritzker Administration.

You can view the Illinois Auditor General’s full report here.

The McHenry County Department of Health is hosting “Operation Dropbox” now through May 31. Items collected will be distributed to our local veterans in McHenry County. Those wishing to make a donation may drop items off at the Department of Health, 2200 N Seminary Ave in Woodstock, or at my district office, 5400 W. Elm Street, Suite 103 in McHenry.

U.S. Supreme Court draft decision leaked
For the first time in modern history, a draft decision of the United States Supreme Court has been publicly leaked. The leaked draft was of the Court’s highly anticipated and controversial decision on the Dobbs v. Jackson Women’s Health Organization case, which could have a long-lasting effect on abortion laws throughout the country.

Following the unprecedented leak, U.S. Supreme Court Chief Justice John Roberts called for the marshal of the court to launch an immediate investigation into the source of the leak.

It is also important to note that it isn’t uncommon for draft decisions and votes to change throughout the Supreme Court’s decision-making process, and the final decision isn’t expected for at least another two months. However, if this draft ends up being the final decision, it would overturn Roe v. Wade and Planned Parenthood v. Casey by returning “the issue of abortion to the people’s elected representatives.” In simple terms, this means each state legislature would be responsible for determining abortion laws for their own state.

This decision would have little to no impact on Illinois as the state has some of the most progressive abortion laws in the entire nation. This fact has not stopped some Illinois lawmakers from suggesting the state pass even more abortion laws, including proposals that have historically been publicly unpopular. 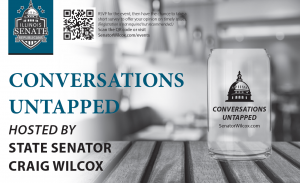 Thank you to everyone who came out to my Conversations on Fire event two weeks ago in Marengo. My staff and I are still working on a robust list of community outreach events for the summer and fall. These events are geared toward various demographics within the 32nd District, with a comprehensive list of events that offers something for everyone. Please mark you calendars for these upcoming events, and keep in mind that several additional items will be added in the coming weeks.

Again, several additional items will be added, so check my website www.SenatorWilcox.com often. For more information about these events, please call my district office at (815) 455-6330.

ICC offers tips to avoid being scammed by movers
With the start of spring and the upcoming end of the school year for kids, moving season is here. The Illinois Commerce Commission (ICC) recently released a few “smart tips” to help Illinoisans in the process of moving avoid being taken advantage of by dishonest or rogue movers.