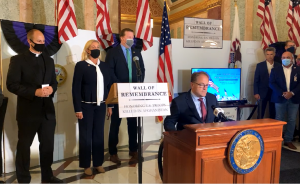 To mark the official ending of the war in Afghanistan, Senate Republicans filed a resolution this week to honor the memory of all U.S. service members killed in the country, including the 13 who died on Aug. 26. The resolution pays tribute to the more than 2,400 U.S. servicemen and women who died serving their country in Afghanistan over the past two decades.

Around midnight Afghanistan time on Aug. 31, Senate Republicans held a special ceremony in the Illinois Capitol to mark President Joe Biden’s withdrawal deadline. At the ceremony, Republican Senators joined members of the House Republican Caucus to dedicate a temporary memorial in the Capitol’s Rotunda to those who made the ultimate sacrifice while serving in Afghanistan.

As you may recall, I recently penned an op-ed on the deteriorating situation in Afghanistan. That op-ed was published in the Northwest Herald last week, and you can read it here.

Congratulations to the City of Woodstock, national winner of “Hometown Techover” contest

I’ve said many times how proud I am to live and work in our small town America up along the northern Illinois border. You won’t find nicer people anywhere, and community spirit is abundant.

I want to personally congratulate the City of Woodstock for becoming the nationwide winner of T-Mobile’s $3 million “Hometown Techover” Contest! As a new business owner in Woodstock myself, I was amazed watching the community unite as this contest was ongoing. And as their State Senator, I am extremely proud of their courage, commitment, and ability to promote our small town America.

Woodstock was selected from thousands of entries across the country, and this $3 million technology investment will be transformational for strategic growth and development. Congratulations Woodstock!! Be sure to watch this video, as the Today Show announces Woodstock as the contest winner!

Revised legislative maps pass despite criticism of process
Using the same non-transparent process they used when the first set of redistricting maps were approved in May (maps that were tossed out because they did not meet Constitutional representation requirements), majority party Democrats used the same rushed, non-transparent tactics to slam their revised maps through the General Assembly in just one legislative session day on Tuesday, giving very little time for anyone outside of the majority party to review them and offer input. Click here to view a short montage of testimony from community groups pleading for a fair map. 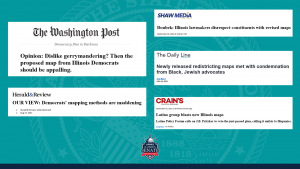 Hearings with next to no notice were scheduled, those wishing to provide testimony showed up to find doors to hearing rooms locked, and some who registered to provide testimony on Zoom were not sent links that allowed them to participate. Despite this horribly non-transparent process, maps were approved through strictly party line votes. Community groups representing good government and ethnic rights organizations denounced the new maps and claim certain groups remain underrepresented in the new maps. As you can see from the graphic, news coverage of the passage and content of the new maps included scathing headlines.

The new maps now head to the Governor’s desk. I encourage all Illinoisans to fight back against these unfair maps by signing a petition urging Gov. JB Pritzker to keep his campaign promise and veto these partisan-drawn maps. You can also voice your disapproval by calling the Governor at one of these four phone numbers:

If voice mailboxes are full, you can register your opinion through a contact form at: https://www2.illinois.gov/sites/gov/contactus/Pages/VoiceAnOpinion.aspx.

I fully support a cleaner energy future for Illinois and was hoping to be able to support the bill. But in the end I voted “present” because I feel the bill still needs more work. My present vote was meant as a signal to those negotiating the bill, that they have gotten closer to earning my “Yes” vote, but I didn’t want to torpedo that work with a “No” vote.  The bill will be amended in the House, and my hopes are that the amendments make promising changes.

As passed in the Senate, the nearly 1,000-page bill contained several sweeping provisions that will have both short-term and long-term effects on the state’s energy portfolio, including:

As the bill stands, utility rates will increase from 3%-7% for consumers.

In July, the Illinois Auditor General released a blistering but limited financial report of the Illinois Department of Employment Security (IDES) that covered roughly two months of the 16-month PUA program. That report, which prompted the Commission’s resolution, noted numerous failures by the Pritzker Administration in its management of the state’s unemployment programs, including payment of unemployment benefits to deceased individuals and awarding potentially ineligible claimants during the two-month period with nearly $155 million.

I support the call for a more in-depth audit of the entire PUA program, and believe that many of the program’s failures could have been avoided. I also support the Commission’s decision to call for an audit of the state’s BIG program, which has had concerns raised about grants going to businesses already permanently shut down, its failure to meet statutory goals for the distribution of grants to downstate businesses, and the prioritization of businesses in some pre-selected ZIP codes for grant funding.

Take my summer survey!
I recently made a digital summer survey available to the residents of the 32nd Senate District. I hope you’ll take the time to fill out the short survey, which includes a few questions and room for expanded comments at the end. I hope everyone will take a few minutes to complete the survey, because the responses help me take votes in Springfield that are representative of the opinions within the 32nd District. You can access the digital survey at: https://senatorwilcox.com/summersurvey/. 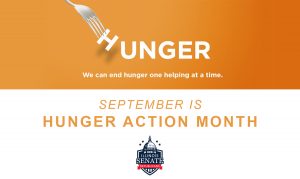 Today is National Food Bank Day to kick off Hunger Action Month. It is estimated that more than 42 million people may experience profound hunger this year, including 13 million children. Don’t we all have a few items in our pantry that we could donate to a local food pantry? Find a food pantry near you at: https://www.feedingamerica.org/find-your-local-foodbank

The Small Equipment Grant Program was established to provide grants of up to $26,000 for the purchase of small firefighting and ambulance equipment. A total of $3.3 million was awarded to 149 fire departments/districts and EMS providers in June.

In the civil complaint, the two counties allege the Way Forward Act violates the US and state Constitutions and infringes on intergovernmental immunity by interfering with federal government operations while eliminating millions in revenue for the two counties.

In McHenry County, an effort to cancel the county’s ICE contract was brought before the county board in May and was defeated. If the end of the contract stands, ICE detainees will not be released. They will be moved to other states, further away from their families and legal teams.